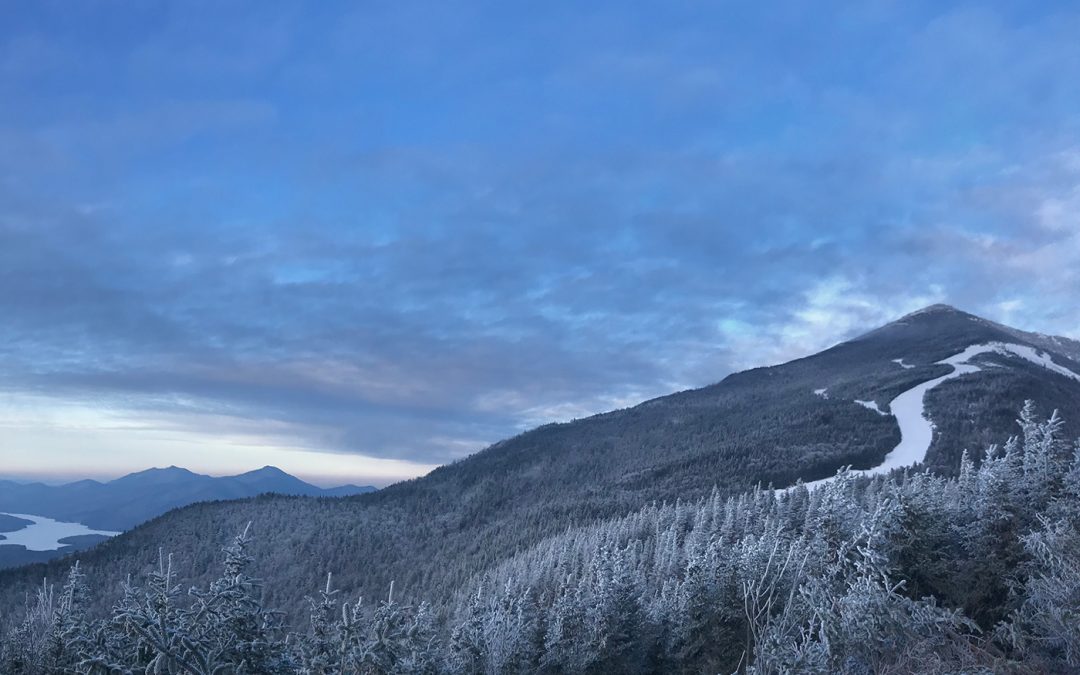 The onomatopoeia of my skis made a pee-choo, pee-choo, pee-choo sound like a torpedo firing as I glided forward, climbing the mountain I grew up skiing down every winter and hiking up every summer – a mountain I have climbed from all sides and up every rock slide and frequently conquered on skis but never this way.

This was a new sensation; another step towards exploring my boundaries, the limits of my comfort zone.

Brantley my friend, and now unofficial guide when I’m seeking to do something slightly extreme, knew the route well; he often summits as the sun comes up yet somehow still makes it to work in Plattsburgh on time. 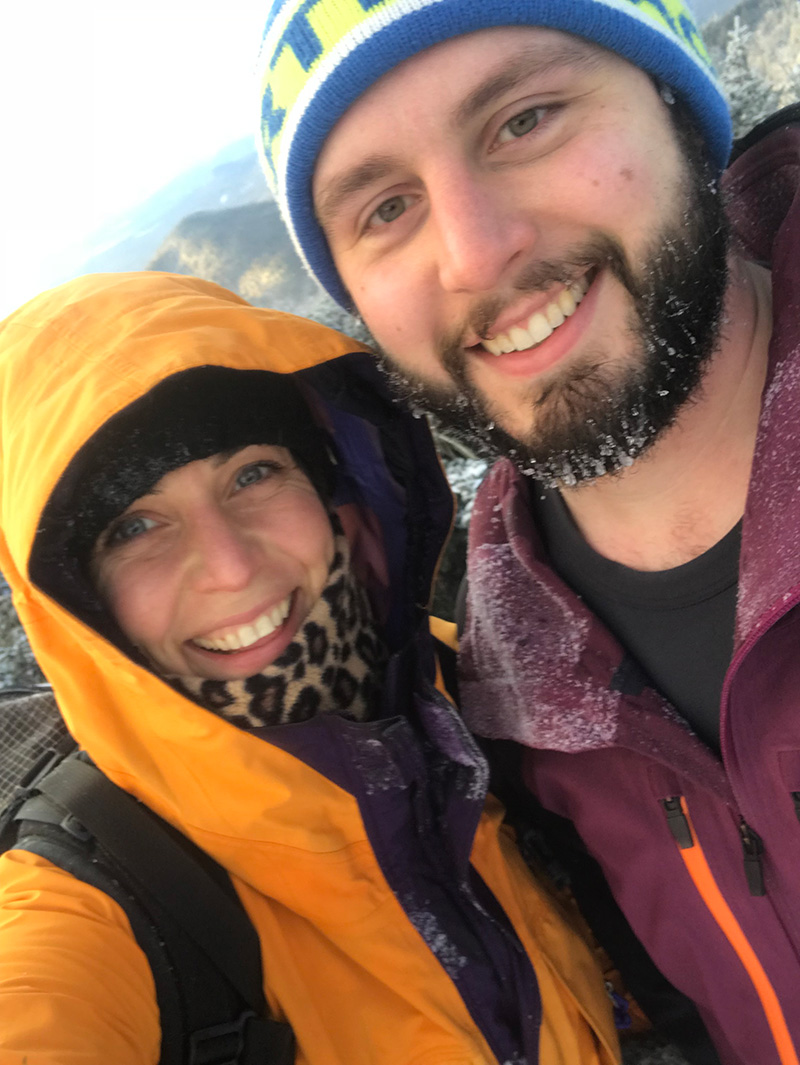 “I’m not as nervous as I was last year at this time. It was this day, wasn’t it?”

I laughed and confirmed that yes, it was this same day in 2017 that the two of us set out for a 10-mile backcountry ski to Avalanche Lake, deep in the 6 million-acre “forever wild” state park.

The temperature plummeted to 30 degrees below zero that day and a National Public Radio reporter was waiting at Marcy Dam to see who was crazy enough to be out in weather like that. It was my first day EVER on backcountry skis and it was a massive undertaking but also filled with moments of incredible bliss. You can read (or listen) by clicking HERE.

Most of that final day of 2017 I spoke about my desire to “skin” up Whiteface, a 46er in the Adirondack Mountains that is 10th on the list of forty-six High Peaks in the region that are over 4,000 feet in elevation.

And so here we were, exactly a year later ascending the man-made playground in the midst of supreme wilderness. A mountain with a continuous vertical drop of 3,430 feet (the highest in eastern North America), site of the 1932 and 1980 Olympics and affectionately dubbed “IceFace” so called for its unique boilerplate base layer.

Brantley was patient with me considering all my stops for gear and layer adjustment. He was easy, calm yet direct in his pointers and advice; the communication between expert and novice gentle but resolute.

Drag your toes as you take each step.

Look uphill – to where you are going.

Transfer your weight from one foot to the other. Be intentional.

Slow and steady wins; when you go fast you end up being slow.

My early morning internal cocktail of excitement and nerves metabolized by the time we reach the first nub of Boreen – I was pushing myself, breathing hard and feeling the heat accumulate at my core. I was a bit out of shape after the Christmas holiday but I was confident I would make it to the top.

Growing up, as I shivered every lift ride, I daydreamed about how good it would feel to climb up this mountain and ski down. It’s in my blood to feel this way. My grandfather was in the 10th Mountain Division and was known to ski up Mount Marcy (the highest point in New York State) for breakfast. His genes run deep throughout me even though I never knew him.

The early morning light turned from black to bluish grey as snowcats and snowmobiles with flashing lights rolled by leaving the permeating smell of diesel in their wake. It was a far cry from the stillness of the previous year’s journey but with more ease knowing we were still in civilized terrain, and monitored by all the ski patrollers on their morning rounds.

We approached another crest and Brantley suggested initiating the mid-way heel lift on my binding telling me the second setting, even higher, was for steeper terrain.

I giggled to myself thinking that the lift made me feel like I was in a pump, the higher setting like a stiletto.

We continued our steady pace though I needed multiple small breaks for layer adjustment and frequent changes in the heel lifts. Some of the pitches intimidated me and about ¾ of the way to the top, my ego kicked in…

I can do this, I responded.

Who are you to think you can accomplish this?

I know I can do this. I AM DOING THIS, I shouted silently.

My body was screaming for mercy but knowing it was there, feeling slight discomfort in my left hip, fatigue in my muscles and listening to a pretty pronounced inner dialogue, that I was growing.

From Boreen we made our way up Excelsior which lead us to the top of “Little Whiteface” where the Cloudsplitter gondola deposits thousands of people on a holiday; ski patrol and another pair of skiers were the only other people. 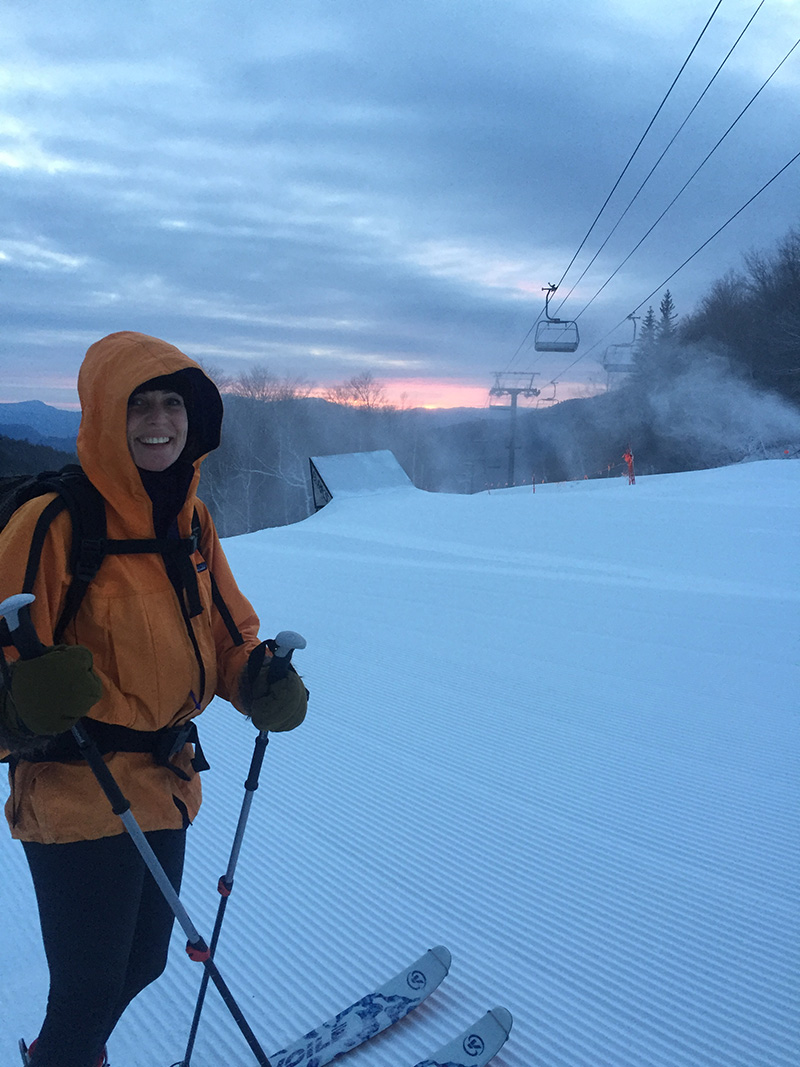 We glided over to the observation deck to remove the skins from the bottom of our skis, add layers, snap the obligatory photos and selfies and officially clip into our bindings for the descent to the main lodge.

Three-thousand-eight-hundred-and-eighty feet above sea level was the perfect view to usher out the old and bring in the new.

Our ascent lasted 1.5 hours, the ski down took 10 minutes. 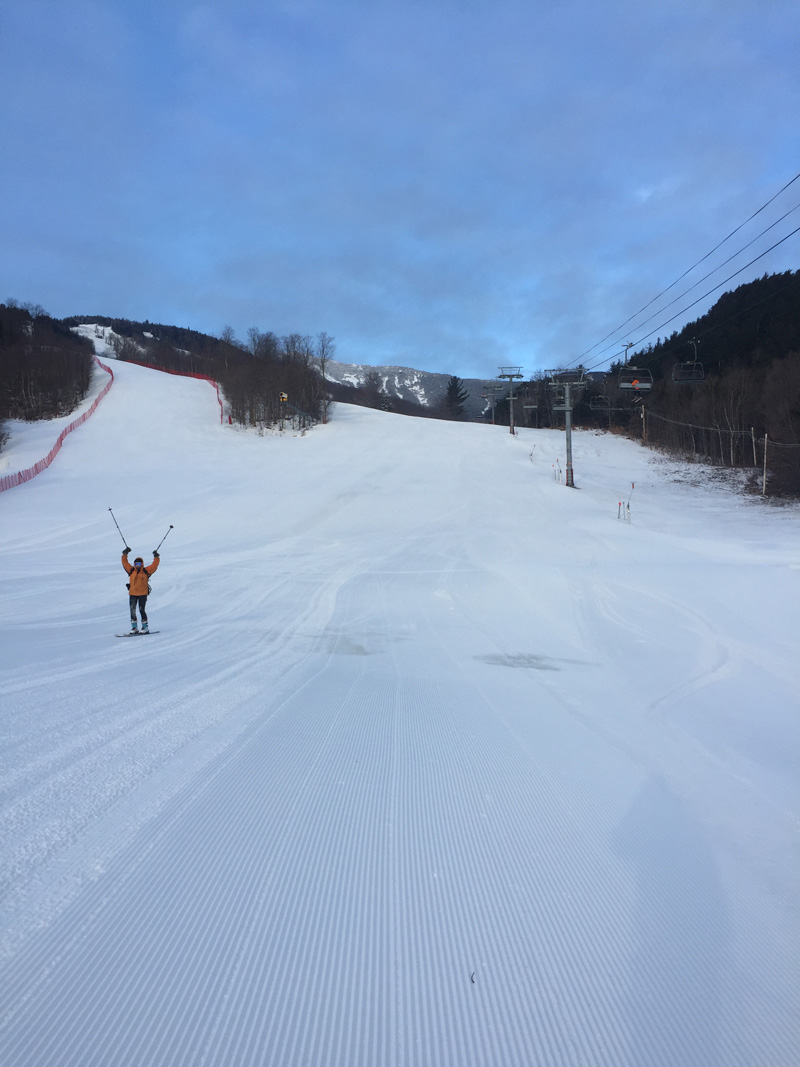 With every turn I remembered moments skiing here with my parents, my brothers, friends growing up and how free I had felt gathering speed on the steep decline after midstation, riding the momentum on the flattened part as Tower Ten becomes more gentle and where I always liked crossing my poles behind my back and just leaning into the front of my boots to move one ski in front of the other, turning just enough while staying straight.

Brantley skied ahead of me to snap a few photos. I raised my arms in victory for the camera. 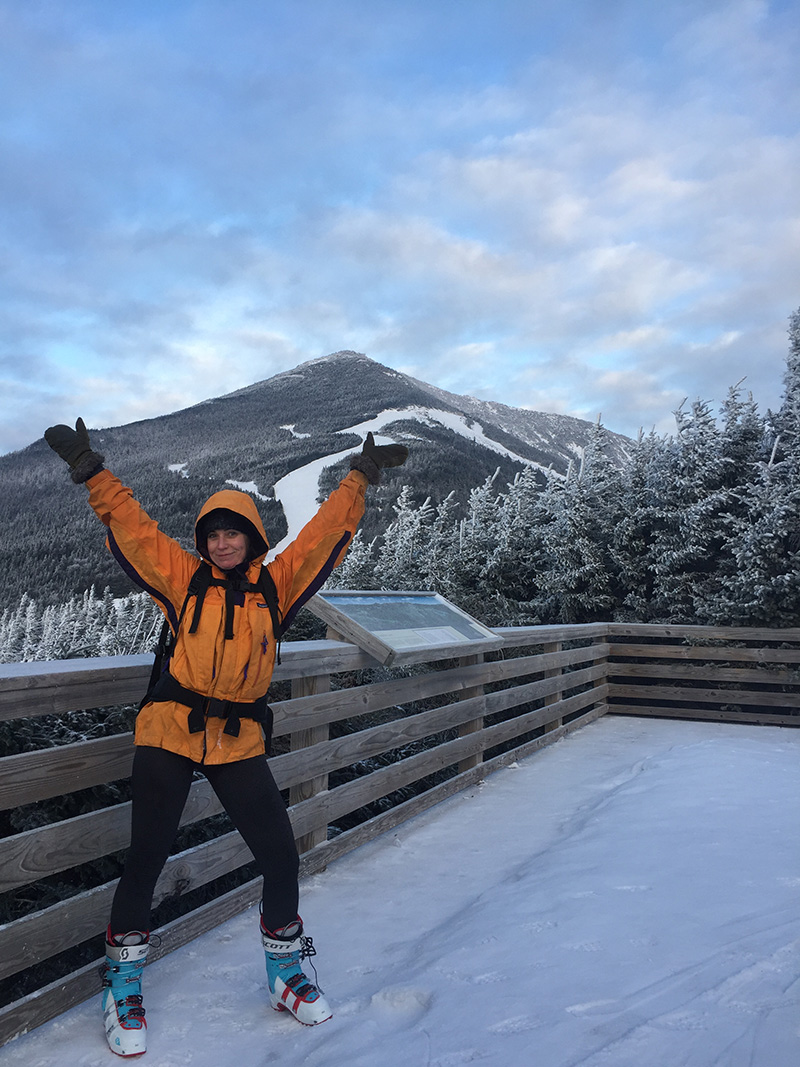 I returned home to a quiet house, the waning crescent moon and Venus who had overseen my early morning departure were no longer visible in the bright sky, my endorphin high still intact but tempered by overwhelming fatigue from the 1,000 calories I had burned.

I took a hot shower, ate a massive breakfast and then laid down for a nap as I wrote these insights in my Tout Book (aka “journal”):

1)  Chin up, look up for progress – it was so easy to focus on the tips of my skis which meant my chin was tucked into my neck and my foresight was nonexistent. When I focused on where I was going, my strides were longer, more determined and I gained more ground. It made me think of being on the yoga mat: look to where you are going, my teacher often says.

2)   Intentional shifts provide stability – when I focused on transitioning my weight from one ski to the other, particularly on the “stiletto steep” terrain, I felt more confident and my skis responded better.

3)  Go fast, end up slow; go steady, end up fast – this pertains to the age-old parable of the tortoise and the hare. When you are climbing to great heights, slow and steady wins every time.

I’ve been reflecting on WTF these lessons have to do with the work I do and I have come to these points:

1) LAYERS ARE KEY – pretty much always, especially in winter and particularly when temperatures will be shifting. Layers add dimension to an outfit and support you with versatility because they can be added or stripped.

2) Good Gear Lasts 20 + years – notice the orange shell I’m wearing? I’ve had it since high school. I believe what we buy should support us for as long as possible and when you have the right gear (i.e. clothes) there is no such thing as bad weather.

This coming Saturday January 12, 2019 I am hosting an unprecedented group shopping excursion to the Wrentham Outlets, MA. This will be an intimate, highly curated experience for anyone willing to finally say “Today I Fix My Wardrobe”.